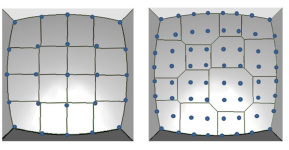 Abstract: We implemented the linear programming approach proposed by Oliker and by Wang to solve the single reflector problem for a point source and a far-field target. The algorithm was shown to produce solutions that aim the input rays at the intersections between neighboring reflectors. This feature makes it possible to obtain the same reflector with a low number of rays – of the order of the number of targets – as with a high number of rays, greatly reducing the computation complexity of the problem.